I Didn't Bring a Scallion, but I Want One

Line from Miku-mikuni Shiteageru. And yes, "negi" means "scallion", not "leek"—also that thing Miku's always swinging around seems somewhat thin to be a leek. In Asia, they grow the Welsh onion, which never develops a bulb, so it's probably not correct to translate it as "spring onion".

Reborn in the Purple

So I've had complaints about the bright green on black being hard to read. Personally I found it soothing, but, other people being able to read one's blog is not without a certain significance.

How do you like white (actually, very pale pink) on Tyrian purple, instead?

Changed the fonts, too; I like slab serifs. I think I'd gone with Josefin Slab once before. The headers are Josefin Sans.
Posted by Sophia's Favorite at 8:28 AM 1 comment:


"Even assuming it were just a set of energy states in the brain, and it isn't, brains aren't digital. Think of digital audio with the ten layers of white noise..."

You can always, in principle, get rid of the noise by digitising/simulating with sufficient resolution, at increasing cost in memory and computer resources. It's possible that a decent brain upload and simulation would be possible but restricted only to the rich, and everyone else would have to make do with something low-res and glitchier.

Actually you just make the noise more subtle. It is—in principle—impossible to eliminate noise when converting between analog and digital. In practice, you can make the noise be composed of so many pixels ("high resolution") that people don't notice it, but, well, "little inaccuracies nobody notices" may be just fine for music or photos, not so much when it comes to people's minds.

Leaving to one side that according to the Lucas-Penrose argument in cybernetics, the mind is unrepresentable in machine logic—that's what I meant by "it's not just a set of energy-states in the brain". Human beings can construct Gödel propositions, machines are—by definition—incapable of doing so. And all the counterarguments to Lucas-Penrose are merely exercises in utterly missing the point.

Sorry, mind-uploading makes FTL look easily feasible. FTL only violates our current conception of the laws of physics; mind-uploading is a logical impossibility.
Posted by Sophia's Favorite at 8:45 AM 1 comment:

Well, really the way it worked was that I had probably built fifty robots before Mystery Science Theater, and I had sold them in a store in Minneapolis in a store called Props, which was kind of a high end gift shop.
—Joel Hodgson

Post about future tech/equipment, with which I kick off a new tag relating to same, "production design/props". If you feel like browsing by tags, you might wanna periodically inspect that one, 'cause it's gonna take a bit for me to go through and tag all the old posts.

Posted by Sophia's Favorite at 10:59 AM No comments:

Italian translation for "One hit, one kill" (一撃一殺, ichigeki hissatsu).

So a lot of fans of European martial arts get mad when you point out they're doing the exact same thing as Japanese martial arts. But...they are.

For instance, the "longsword", which is the thing most of us think of as a bastard or hand-and-a-half sword (slightly smaller than the great- or two-handed sword), works just like a katana. Half-swording, for instance, was probably involved in Okita Sôjirô's "three-piece stab" (sandanzuki); it's just too hard to stab someone quickly in both shoulders and the throat without the other hand getting involved. It's also used in some high blocks in Yagyû Shinkage swordsmanship.

Or how about this picture: 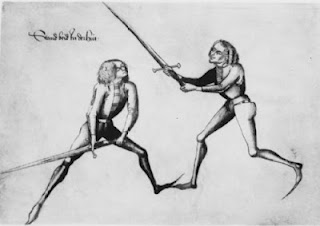 That guy on the left? Waki-kamae. Dude on the right is in chûdan kamae.

Finally, apparently a sword-fighting manuscript by Fiore dei Liberi (I don't know if it's his Flower of Battle, or something else), talks about using the longsword with one hand. Know what specific advantage he talks about?

That's right, Saitô Hajime's signature left-handed thrust, the surprise step-through and stab while taking your front hand off the hilt, giving you an extra 1 to 2.5 feet of reach.
Posted by Sophia's Favorite at 11:58 PM 1 comment:

That last word there is read as "dos", of course. Thoughts upon the plying of my ignominious trade.

Posted by Sophia's Favorite at 1:33 AM No comments:

Let Me Play Among the Stars

Science fiction. And science. And fiction.

The Countless Foliage of the Tree of Tales

Was working on my scripts, and getting frustrated with my inability to make my Elvish into a font. Decided to use a different means of script-formation than the pictograph-one that changes Egyptian to Phoenician.

See, it occurred to me, if both the elves and the dwarves awoke at the same time (the elves as shoots of the World Tree, the dwarves "born of Mother Earth and Father Fire"), the dwarves, living much shorter, would doubtless have more 'innovation'. After all, as Max Planck said, "A new scientific truth does not triumph by convincing its opponents and making them see the light, but rather because its opponents eventually die, and a new generation grows up that is familiar with it." Even absent the (contemptible great-ape) traits that make humans resist new techniques and ideas, individuals simply don't bother to learn new methods if the ones they had were sufficient.

But eventually, probably after about a dozen dwarf lifetimes and a few elf generations, the elves, still using logograms (more on those in a second), might notice that the dwarves had developed a phonetic notation, and devise one for themselves. We do, in fact, have an example of how that looks, when it's not done by academics; its creation was probably inspired either by the Elder Futhark or by Roman writing, probably the former given that it has a Z, and the Romans used that letter about as often as we use ð. Also Z did not, and does not, exist in Irish.

Because I refer to Ogham (a 4th-6th century inscription in which, by the way, mentions my surname). Now, while its "just add another notch" system is near to the over-regularity I dislike in most con-scripts, they aren't based on similarities of the phonemes; they seem to be semi-random. Thus, I assigned my letters to their shapes in "alphabetical" order—the random alphabetical order I created by ticking off the sounds in my elvish as I went down the word list (it was alphabetized by the English words, so the elvish words were in random order—I recommend this method for coming up with alphabetical orderings in conlangs).

Of course, Ogham is rather ugly to be an elvish writing (and—I'm roughly 5/8 Irish so I'm allowed to say this—Irish, like Welsh, is rather ugly to be a base for elvish). But I used the principle of the thing. Rather than going "1-2-3-4-5 strokes on one side, 1-2-3-4-5 strokes on the other", etc., I start with a stroke pointing one way, on one side of the center line, then on the other side, then pointing the other way and on the first side, then pointing that way and on the other side again. After that, I add a single smaller stroke to the first stroke, and repeat the process. After that, though, instead of adding another subordinate stroke, I add a dot—and again repeat the process. Then I add another dot and repeat, and a third dot and repeat. I only use two of that last, since I only needed 18 consonants. The vowels are exactly like the consonants, except they have their strokes on both sides of the center line (I only need 10 of them, for the 5 basic vowels and their long counterparts, and I had 5 basic shapes to play with and could still switch them in two directions).

Notice, though—main center line, stroke off of that, smaller stroke off of that. My elves call these 'stems, branches, and twigs.' The dots, they call 'leaves'. Though if, e.g., carving it on a cave entrance to say "Don't go in", they can make characters out of notches and gouges, it also readily lends itself to decorative use, each "leaf"-dot being drawn as an actual leaf, sentences as trees with each branch a word, and so on. Plus it's got a "fractal" structure, which was a theme I'd already used other places in my Elvish culture—being shoots of the World Tree, branching (and we really ought to call "fractals" "ramals", since they're "branching"—like blood vessels—more than they're "breaking") is a major element of their worldview.

Late Addendum: Whoops! I said I'd get to more on the logograms, and then forgot to! Anyway, so, the elvish logograms work like most others, I think; individual characters are made up of a combination of basic signs, with elements corresponding to semantic and phonetic—like how "loyalty" in Chinese is written 忠, composed of 中 "middle" and "heart" 心. The heart is because it's a feeling; the middle is because "loyalty" and "middle" are pronounced the same (zhong in Mandarin, chû in Japanese, and *trieung, ish, in Old Chinese, apparently)—so it's "the feeling that sounds like 'middle'".

But while I was researching elvish writing in other series (I am so glad Forgotten Realms had the sense to redo Espruar), I came across some of the stuff with the Eldar Lexicon from Warhammer 40K (space-elves still count). And their writing, which appears to be some combination of logograms, sounds, and psychometry, has a look I like, and some of the things they do struck me as neat, if unlikely. While it is unlikely that, as is so often done in fictional scripts, anyone would convey "bad" by inverting "good" (to sum up a major theme of the Eldar writing system)...what about conveying other information by the shape and orientation of the sign?

So I decided my elves' logograms have a basic "core", that works like a hanzi, hieroglyph, or Sumerogram—it represents a stem. Then, around it, they draw shapes, that convey other information. I was going for an Eldar-like look, so they use triangles for verbs and circles for nouns; whether the triangle's point is up or down depends on whether the verb is intransitive or transitive (remember, my elvish grammar is based on Tibetan—it's ergative). I have little flanges at the top and bottom that convey, e.g., tense, aspect, and mood (indicative unmarked, but they also have subjunctive, and express the negative as a separate verbal conjugation the way Korean and Japanese do).

Of course, the elves still use their logograms despite having an alphabet (anyone who thinks that's a silly idea, I cordially invite you to try any scholarly inquiry in a Korean topic, without the aid of hanja—I look forward to reading your suicide note). Logograms have a number of advantages, that's why Egypt, Mesopotamia, the Maya, and Japan (have) kept them in use for centuries after they developed a phonetic writing system.
Posted by Sophia's Favorite at 2:35 PM No comments:

Some things I forgot to put in that last random thoughts post. Strictly speaking, I only confirmed one of them today. But, anyway.

Posted by Sophia's Favorite at 5:50 PM No comments:

Labels: Philosophy, reality check, video games
Newer Posts Older Posts Home
Subscribe to: Posts (Atom)
Because philosophy arises from awe, a philosopher is bound in his way to be a lover of myths and poetic fables. Poets and philosophers are alike in being big with wonder.
—St. Thomas Aquinas
Commentary, I Metaphysics 3.55

Check out my writing on DeviantArt.

Sophia's Favorite
"Philosopher" means "friend of Wisdom", so yes, the blog name means I'm saying I'm the best philosopher. Specifically I'm a Thomist, and a Catholic. I'm also an almost universal geek—name a subject, and I can probably geek out about it. Many people say "I don't agree with you, but you have a right to your opinion." But even if I do agree with you, if you can't make a case for your opinion then I deny your right to it.

Other Blogs (not by me)